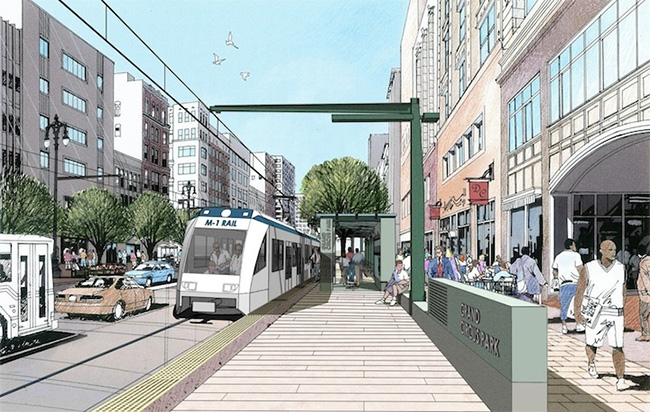 Construction for the M-1 rail streetcar project began on Monday, July 28th, closing off Woodward between Campus Martius and Grand Circus Park for the next four months. The project that is slated for completion in 2016 will span over 3 miles, between Jefferson and Grand Boulevard, offering the first rail transit system to hit Detroit since the 1950’s. The budget for the rail system is set at $160 million.

Over the next few months, over 700 new construction jobs will be created to last throughout the next 2 years. Crews will be rebuilding and remodeling the existing road on Woodward, and placing down the rail that will line the cars. While the closing is difficult for some commuters, the impact on local businesses will be even greater. Many newly opened businesses in this area rely on foot traffic for the bulk of their business, and will be seeing less customers. However, most business owners are optimistic that this slight decrease in revenue will bounce back in greater numbers, as the rail car will offer more people the opportunity to travel downtown.

The rail system will house six different cars that will be able to transport as many as 600 people per trip. Ideally, the rail system is set for passengers to only wait, on average, 5 minutes per trip for a car. The system will run in conjunction with other public service transit mediums, such as the DDOt, Amtrack, People Move, and SMART buses.

This anticipated project has been granted $3 million in funding from the Wayne County Commissioners, but not all are happy with the decision. This money has been allocated to improving the existing roadwork and creating a stable foundation for the rail system. However, some committee members that the money should have been set aside for fixing the road issues that have been lingering in Detroit for years. Overall, many committee members agreed that the M-1 rail project would be for the “greater good” of Detroit and will have an incredible impact on the overall economy of the city.

Mayor Mike Duggan is hopefully that the M-1 rail car is a start to something bigger. He has already projected his plans for expanding further into 8 mile, and even as far as Pontiac. While private donors fund majority of the project, Mayor Duggan believes that the spirit of Detroit will help create more positive momentum for the bigger projects that can emerge from this M-1 railcar.