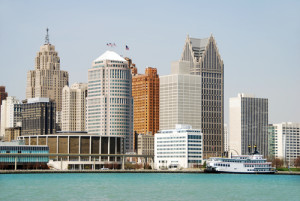 Over the past few weeks, it’s been challenge to open up the paper and not see someone snatching up prime Detroit commercial real estate. With a new appreciation for Detroit landmarks, more and more companies are purchasing historic locations and renovating them to their full potential. The success of creative minds that have reestablished the areas of Midtown and Corktown have inspired more to do the same. Here are a few of the top headlines that have transacted recently, in hopes of building a more economical and desirable Detroit.

Information started pouring in early on July 2nd, regarding the purchase of the Detroit Firehouse Headquarters near Cobo Center. The Chicago-stationed Aparium Hotel Group purchased the historic landmark for $1.25 million earlier this week. The plans for this space include an upscale and elite hotel experience, slated at a $28 million investment. Scheduled to open in 2015, the hotel will also feature an extensive dining area on the main level, wooing residents with tasteful cuisine.

The second Detroit location of Meijer officially started construction on June 30th, 2014. The installment of this location was due to the success of the first Detroit Meijer, opened in 2013 and located between 8 mile and Woodward. Scheduled to be a more “neighborhood” friendly store, Meijer has seen incredible success in the bakery and fresh produce sections of their first store in Detroit. The new Meijer commercial building will make way to over 500 new jobs for residents, and hopefully attract other Michigan native companies to set foot inside the city limits.

While no scheduled projects is listed for the 615 W. Lafayette building, it’s important to note that Detroit mogul, Dan Gilbert and Bedrock Real Estate Services have placed another building into their master Detroit renovation plans. With a listing price of $8 million, the founder of Quicken Loans is sure to have something exciting in store for this prime land. President of the Detroit Free Press, Joyce Jenereaux expressed her excitement and hope for the future of Detroit, in the hands of her building’s new owners. The employees of the Detroit Media Partnership will temporarily be moving to the Federal Reserve Building, also owned by Gilbert, in order to quickly start renovations.