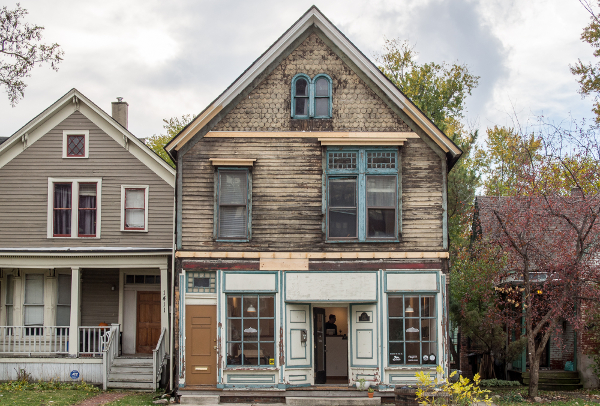 Music is no stranger to the city of Detroit, which is why any new addition to the eclectic flair of the Motown city is always welcomed. Located in the up-and-coming West Village of Detroit, Paramita Sound opened its doors on Saturday October 25th, 2014. Owner and resident of West Village, Andrey Douthard, turned this old and abandoned home into a hip and vibrant new record store, offering a music scene that was lacking in the surround area.

Paramita Sound is located on 1417 Van Dyke in Detroit, near Agnes Street. The old Sanskrit word, meaning ‘perfection,’ sits in the middle of other ideally placed businesses, such as Tarot and Tea, Parker Street Market, and Detroit Vegan Soul.

Residents of the West Village area and curious locals alike flocked to Paramita on their opening day, hoping to get first dibs on rare and collectable albums. Many were thrilled at the prospect of a record store opening in the area, as it is sure to attract young and professional customers, who may have otherwise overlooked this specific area of Detroit. With live music, and a lounge area for customers to linger, the grand opening was a big success for the Detroit neighborhood.

While Douthard appreciates the want and need for his business, he is also looking to create more than just a record store. His hope is to utilize Paramita as a community-gathering place and social stance for the West Village. With a common interest such as music, many who may have otherwise not conversed, have a way to find support from each other.

Paramita has over 400 records in its’ current inventory, and is looking to quickly grow. Artists such as Radiohead and Alice Coltrane can be found on their vibrant racks and shelves.

The record store was opened in support and conjunction with the REVOLVE Detroit program, MGM Grand Detroit Casino, and The Villages Community Development Corporation. Paramita was given a $10,000 grant along with funding from TechTown Detroit. As a winner of the REVOLVE Detroit program, Douthard understands that starting a new business during the current economy and hardships that face Detroit can be a great challenge. However, with the financial and emotional support he has been extended from the city, he is hopeful for long-term success.

The Villages Community Development Corporation has expressed their excitement over the opening of another vibrant business in their neck of the woods. Executive Director, Brian Hurttienne stated, “We are excited to have this happen [to] further our expansion on the neighborhood and make it a more livable community.”