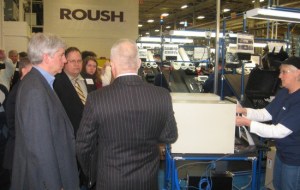 Over 270 jobs are coming to Metro Detroit, thanks to Roush Industries Inc., and Inzi Controls Detroit, LLC. After receiving assistance from the state of over $1 million, these companies are prepared to stabilize Detroit as a hub for manufacturing, engineering, and technological advances.

With over $13 million expected to also be brought forth from private investors, the Michigan Strategic Fund approved these companies to expand their efforts into Detroit. The Michigan Economic Development Corporation (MEDC) has also put forth their support towards the Roush and Inzi companies. In a press conference held in late July, the MEDC CEO, Michael Finney, explained that Michigan is at the top of the list for manufacturing jobs, and is attracting talent at a globally competitive rate.

Likewise, one of the first efforts brought forth by Roush would be the implementation of new Google Inc. cars. The automobiles are slated to be self-driving, and have already been manufactured as a prototype in their Allen Park location.

Along with expanding their efforts into Detroit, the MEDC stated that Roush and Inzi will be placing more locations and space into Allen Park and Livonia. These leased spaces will be home to mostly manufacturing and engineering facilities, and potentially to house the Google Inc. cars.

The Director of Corporate Communications for Roush, Maureen Crowley, has explained that the expansion into these areas is not for anything specific. Roush has also dived into the aerospace, oil, and gas sectors of the economy, along with increased growth of their original ventures.

The MEDC explained that the main goal for Roush companies is to provide “alternative” fueling methods to high performance vehicles and other transportation mediums. Roush additionally provides services to the oil and gas companies across the country, such as defense and transportation.

Roush chose Michigan as their hub, over locations in Colorado and Florida. To show their appreciation, Roush companies received a $1 million grant in order to help stimulate the 200 jobs that they have promised. Likewise, Roush will be quickly opening a new manufacturing plant in Rochester Hills, which will assist the automotive industry.

Inzi plans to add 60-70 additional jobs to the Roush pledge, and was also awarded a grant of $150,000. This was given in favor to Inzi for also not choosing to place their newest plant in Alabama, where they are currently stationed.

This news comes at a prime time for Detroit and its’ bankruptcy issues. As the city rises above financial problems, day by day, it is clear to see that Detroit is on the way to being at the top of the game, once again.