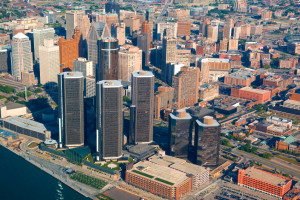 In 2017, the newest addition to downtown Detroit's sports empire, the new Red Wings Arena, will open its' doors to the millions of fans that cannot wait to get a seat near the ice. As promised, there is expected to be a plethora of retail space, restaurants, townhomes, condos, and business offices, also surrounding the entire arena and neighboring streets. However, it looks like construction has stalled on these expansive projects.

Those following the downtown Detroit renovations near the arena don't believe that construction will even begin on these livable spaces and businesses, until the arena itself it open. Why is this the case? Experts believe that until people can see the reality of the Red Wings arena in full force, they won't believe that this area of Detroit will pick up with desire, hence investors are slow to move forward with putting down roots in this downtown location.

While the Olympia Development team isn't directly commenting on these allegations, their silence may be saying more than they think. Many are hopeful that some type of retail and apartment construction will happen soon, but know that if it doesn't, they may be looking at a much larger timeline for building.

What has been slated to be built downtown near the new Red Wings arena?

While the delay in construction doesn't mean that these projects won't see the light of day, it does bring worry to those who were looking forward to completed areas by 2017.