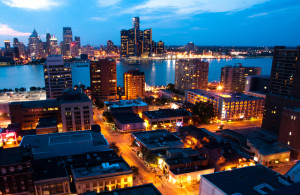 Back in April, the Detroit Free Press ran an article that looked like the Guardian building was going to be placed on the market and finding a new owner. As a main fixture in downtown Detroit, it is also the hub for Wayne County's local government. After millions in renovations on the Guardian Building and Detroit's financial crisis, it looks like the Wayne County is looking to recoup some of their costs.

Wayne County contemplated putting the Guardian Building up for sale to gather interest from any perspective buyers. As of June 8th, 2015, Wayne County government has officially decided that the building will be placed up for sale and is open to buyers. Additionally, Wayne County is looking to sell at least 2 other properties that are also owned by the government. In order to assist Wayne County with its' financial woes, and make up for over $65 million in structural debt, the Woodward staple will be placed on the market.

So far, no specific real estate firm has been selected to represent the Guardian Building. As of now, Wayne County has a specific set of requirements for anyone looking to assist in the process of selling the Detroit iconic landmark.

Wayne County originally purchased the Guardian Building in 2008 for a little over $14 million. With the millions of dollars that have been poured into the building to get it up to speed, Wayne County exceeded their renovation budget by over $50 million.

Wayne County is very confident that the building will not lose its' value for years to come, and will only sell if the price is right. As one of the fewest buildings downtown in such impeccable condition, the decision to sell the Guardian Building did not come lightly.

Many in the Wayne County government and surrounding areas understand the important of the Guardian Building to Detroit's lush history. It was sanctioned as a National Historic Landmark in 1989 and has continued to thrive downtown ever since. Haven't visited the Guardian Building yet? Free tours of the beautiful landmark are available every weekend with Pure Detroit.