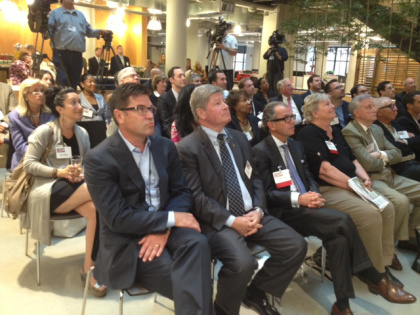 With the anticipated news of Detroit emerging out of bankruptcy, Mayor Mike Duggan has decided to celebrate this feat by incorporating all of Detroit’s familiar faces into one main event. As a moderator of the proposal, Crain’s Detroit Business has entitled this event as “The Detroit Homecoming.” During September 17th- 19th, several prominent Detroit venues and landmarks will host an invitation only event, consisting of “expats” that have been born, raised, educated, and driven in their careers within and around Detroit. These prominent individuals consider Detroit their home, and are prepared to pour in more hard work into the city. A few notable “expats” include the following:

Gwen Butler – A graduate from Mumford High School, Butler continued her education at the University of Michigan. She is currently the president of Capri Capital Partners LLC, and is based out of Chicago. This real estate investment company is also managed by another Detroit “expat,” CEO and Chairman, Quintin Primo III.

Brian Owens – Raised in Detroit, Owens was a notable student in the Detroit Catholic school system. After also attending the University of Michigan, Owens secured a job at eBay as the Vice President and Global Head of Brand Strategy. Even after traveling all over the world with his newfound career, Brian Owens still considers Detroit his home base.

Bill Martin – A graduate of Cooley High School, Martin left Detroit to pursue his education at the University of Michigan. Quickly after venturing into Ann Arbor, Martin saw the need for local investment, and created a community bank for the city. Martin currently holds the title of Athletic Director for the University of Michigan. He is also on the board of the U.S. Olympic Committee, and is an avid real estate investor.

The Detroit Homecoming will host over 150 other distinguished Detroit “expats,” and hopes to motivate them even further into the positive direction that the city is headed. Most “expats” that have revisited the city after an extensive period of time, have been astonished to see the progress and innovation that the city now offers. Jim Hayes, an “expat” and attendee of last year’s Crain’s event, was astonished to see the potential for growth and development in Detroit. Hayes’ background includes working for Sports Illustrated, and a prominent publishing career for Fortune Magazine. As a re-established resident of Detroit, Hayes is excited to assist in the renovation and redesign of Detroit.

Crain’s and the other leaders of The Detroit Homecoming hope to resonate inspiration to the invited “expats,” in order to engage more activity from them, while also improving and supporting the morale of the city. Some of the major sponsors of this event include General Motors, Meridian Health, DTE, Ford Motor Company, Quicken Loans, and the Michigan State Housing Development Authority. Volunteer “expats” who are geared up and ready to promote the city even further during this event include Bill Martin (FirstMartin Corp), Tonya Allen (CEO of Skillman Foundation), Dan Gilbert (Founder and CEO of Quicken Loans & Rock Ventures), Jerry Norcia (President of DTE Energy), and other prominent staff members of the offices of Mayor Duggan and Governor Snyder. The overall impression that The Detroit Homecoming hopes to impress upon their guests is hope, prosperity, and long-term forward momentum for the city of Detroit.