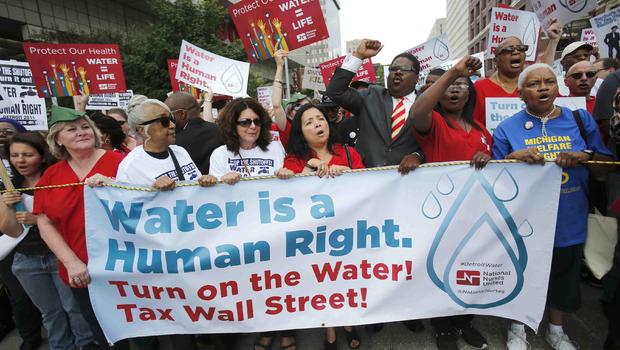 Back in March of 2014, the Detroit Department of Water and Sewage announced that it would be suspending service for those with $150 or more in outstanding balances, or were over two months behind in their water bills. As of this time, there have been over 42,000 families and homes without water, at some point, in the Detroit area. Consequently, this decision has caused uproar of protests around Detroit.

On July 11th, the protests around Detroit escalated to a new level. The National Nurses United led a march and protest near Cobo Center, stating that the elimination of water was an infringement on basic human rights, while also stating that Detroit has a public health crisis on their hands.

The state Department of Community Health disagrees, explaining, “Based on our understanding of the number of residents impacted by the shut-offs, we do not feel there is a public health crisis…” The spokeswoman went on to state that the programs placed within the communities should be able to assist anyone currently without water.

The protests that occurred on Friday led to at least nine arrests, mostly due to the disturbance near businesses that have been joined in with the shut-offs. Banners and signs reading, “Stop the Water Shut-offs,” could be found amongst many protesters, who stood outside companies that aided in the process of the shut-offs, since March. Out of these nine individuals who were arrested, one was Baxter Jones, a 58-year-old wheelchair bound man, holding a sign that read, “Beat back the bullies!” The protesters chanted simultaneously, “Who’s on their side? Corporations. Who’s on our side? United Nations.” Jones, one of the leaders of the group, explained that the entire process of shutting off the water led back to greed between corporations.

The National Nurses United protest led over 1,000 individuals to march around Cobo Center, chanting, “No water, no peace…water is a human right, fight, fight, fight.” These protesters explained that many who were experiencing shut-offs were elderly and unable to pay the increased rates and fees.

Alternatively, Bill Johnson, a spokesperson for the Department of Water and Sewage explained that anyone who has brought forth a valid reason for not being able to pay for their bill has been granted access to their water. The department has explained that there are several payment plans, put in place, to assist those who are having trouble making the full payments. Those who have participated have received water back in their homes as early as 48 hours after contacting the department. For those who were expecting service in their homes on July 11th, massive delays were experienced due to the protests around Detroit. The Department of Water and Sewage has encouraged anyone with issues about their bill to call and talk to a representative immediately.