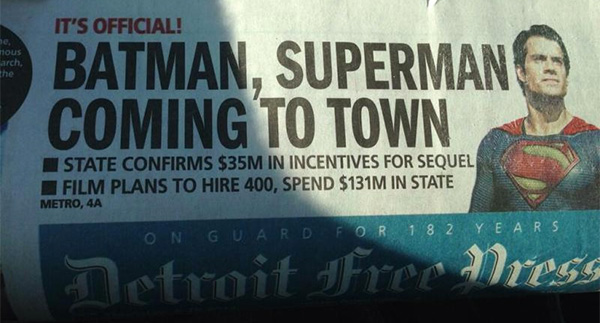 Residents, business goers, and tourists got a taste of the recent filming of “Batman vs. Superman: Dawn of Justice,” in Detroit in early August. Around midday in Detroit, near Fort and Congress, those passing by were sent away by movie officials. The streets surrounding Washington and Griswold were also blocked off, and very little were able to be seen.

However, near Congress and Shelby, some pedestrians stated that more commotion was occurring. As a swarm of cameramen, makeup crews, and set technicians flooded in, a short take for a parking lot scene was taking place near the Green Room Salad Bar.

Anyone working on the movie was silenced on any action surrounding the recent shoot, and overall, it did not appear to look much different than the normal day-to-day bustle in downtown Detroit.

Several different makes and models of Dodge vehicles could be seen from Congress, and overall, it did not appear that anyone noticed anything different occurring, at first. Likewise, police cars, fire trucks, and other emergency vehicles were lining the streets. It was not clear if these were placed for the current shoot, or for safety precautions. However, near Lafayette and Washington, many noticed trailers, food trucks, and other movie business happenings.

Anyone surrounding the area was advised to not take pictures and put away their cell phones. The main attraction in the area was what looked like a fallen building, smashing a Metropolis bus and other vehicles on the street. While crew members stated that filming was already completed in this area, it was heavily monitored by guards, as to not allow pedestrians to tamper with the movie props.

The commotion surrounding the city continues to move forward, as more press on the upcoming Ben Affleck movie starts to sweep the nation. One crew member did suggest that more roads can be expected to be closed off, but that the results will be worth the wait. Detroit has become home to several different action movies that have rocked the box-office in recent years. Two of the ever-popular Transformer movies were filmed directly in the city, and Michael Bay has stated that he plans on utilizing the city even more. Many visiting the city during the summer months were downtown as the filming for the Batman movie was occurring, offering them a different insight into what the city can offer.