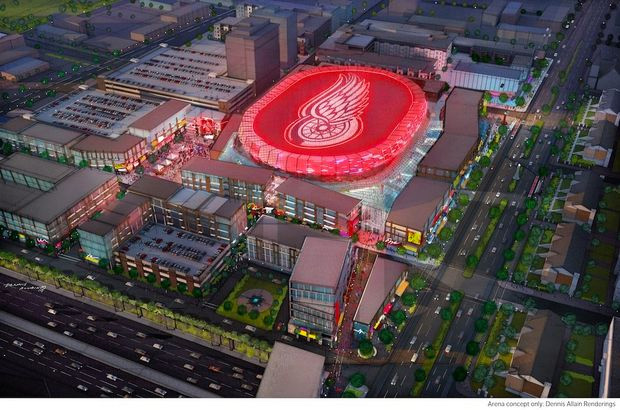 With recent news of the incredible and impressive new Red Wings Arena to hit Midtown Detroit, it has left many wondering one question: Where is the money coming from?

The new downtown development, constructed by Olympia Development and the Illich family, is set to cost nearly $650 million. For a closer look at the money dynamics of this extreme project, here is a breakdown of where the money is being allocated and taken:

$450 million – The cost to build the new Red Wings Arena

$200 million – The cost to “revamp” the surrounding area of midtown, including roads, lights, buildings, homes, and businesses

The hope for Olympia Entertainment is that while they spend their time rebuilding this area of the city, more private investors will come forward. Plans to improve the area around the Detroit River, Cobo Center, and several other locations, have already started discussing future plans, in the mist of this recent news. Taxpayers can feel secure in knowing that the majority of their funds will be segregated towards improving roads, light fixtures, and other public use elements. The development project is projected to bring in over 8,000 jobs for the entire surrounding area. The state of Michigan is expected to feel the difference with nearly a $2 billion revenue increase.

With new neighborhoods, restaurants, businesses, and a thriving economy, many are booming and ecstatic about this Detroit development. Detroit mogul Dan Gilbert has thrown his support to Olympia Entertainment and the Illich family, by stating, “The thoughtful and impressive design will be transformative for downtown…this is the single most exciting and optimistic time for the Woodward corridor and all of downtown Detroit.”

The new Red Wings arena is scheduled to open in 2017, along with the mixed-use development areas surrounding the Midtown location. With the help of state appointment bonds and private funding, Olympia Entertainment has their financials for this project squared away and ready to go.