Canada Brings Water To Those In Detroit Without 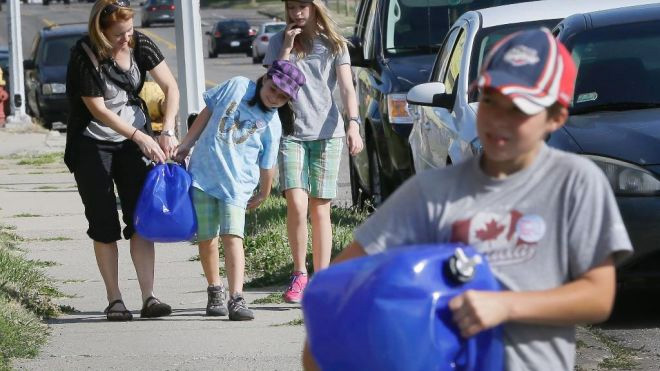 Canadian advocates of the protesters currently standing up to Detroit officials showed their support today in a very direct way. Supporters brought over large quantities of water, to express their attitudes towards the water shut-off’s, plaguing the city.

Detroit protesters have been marching across the city, to express their views on how the city is handling removing water from those who need it most. Water rights advocates brought over 700 gallons of water through the connecting tunnel, to send a clear message. The Detroit Water and Sewage Department has recently shut off service to those with outstanding debts on their bills, and many are unhappy with the new policies.

The Canadian protesters argue that the Detroit Water and Sewage Department are infringing on a declaration passed by the United Nations in 2010, stating that water is a basic standard of human survival, and should be given to all.

Maude Barlow, a Canadian human rights advocate stated, “What that means is that every county in the world is responsible for looking after their most vulnerable…” Barlow goes on to explain that tap water is a basic human right, and shouldn’t be cut off, at any point, from anyone, regardless of his or her financial situation.

However, the Detroit Water and Sewage Department is currently in the mist of a break from their shut-offs. With the news of lack of water reaching across the globe, the city has received unwanted criticism. The water department has explained that there are nearly 90,000 accounts that are overdue, with nearly $100 million in debt. Over 7,500 residents in Detroit have had their water shut off, at some point, since last April. In the mist of a bankruptcy crisis, many officials in Detroit agree that this was not the attention the city needed.

The president of the Canadian Union of Public Employees, Paul Moist, explained that the Canadians are ready to support those in Detroit through the entire water shut-off process. As a symbolic move towards equality and rights, Moist stated that, “America is better than this.”

Many have been pointing fingers at the city to quickly change the pace of the issue. Protesters agree that the deep rooted issues of poverty and lower economic status of those living in Detroit are more pressing to address, and shutting off water will not move towards resolution.