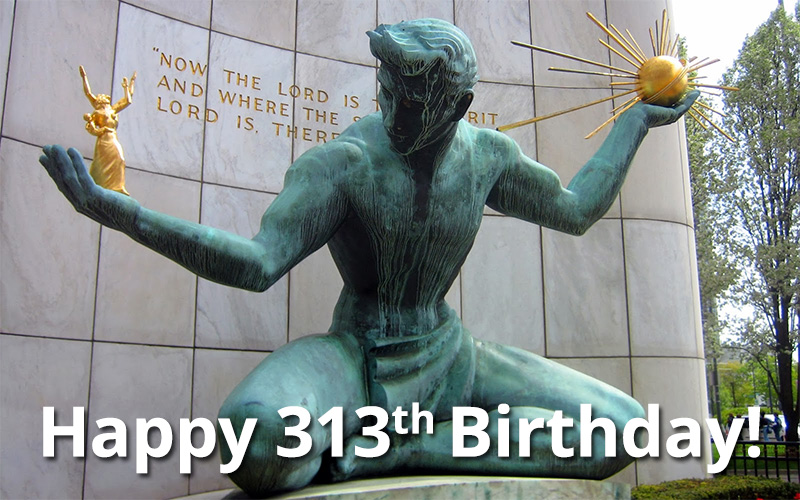 Locals know that the “313” stands for the trademark area code of Detroit, MI. On July 24th, 2014, Detroit celebrated its 313th birthday, marking it as one of the oldest cities in the county. Originally a French trading post, Detroit was founded on July 24th, 1701. In 1761, the United States took control over the remaining French colonies, when the British relinquished their control from the states.

In 1815, Detroit was landmarked as a city, and evolved into one of the most prominent platforms in United States history. Detroit was a ending point for the Underground Railroad, a manufacturing city for automobiles, kitchen appliances, and cigars. However, Detroit still holds the reign as “The Motor City,” in honor of its’ contribution to the automobile industry.

To celebrate the 313th birthday, a gathering was held in Detroit’s Campus Martius Park. Detroit’s City Council President, Brenda Jones, stated, “This is a most significant time in the history of our city, as we face challenges.” With hundreds of local residents and supporting neighbors packed into the park, Jones continued by stating, “Today’s celebration is a reflection of the pride we Detroiters feel.”

In recent news, Detroit has been the poster-child for bad news. With a suffering downturn in economic prosperity, bankruptcy, the result of an emergency manager, and on-going water shut off’s, many see Detroit as a suffering city. However, the positive vibrations rising above the crowd at Campus Martius was nothing but spectacular. When you step away from the news, and look into the city itself, you’re welcomed to booming businesses, new investments, and a growing sense of community and overall pride.

Several local bands attended the birthday festivities, such as The Larry Lee & The Back, who have made their musical landmark in Detroit. Concertgoers’ and partiers alike danced and celebrated to the music of Motown, and others who have made Detroit an entertainment hub. Residents were seen mingling and enjoying each other’s company throughout the day. As one Detroiter put it, with regards to local and political involvement, “It makes me want to get to work, seeing how hard they are working to get the city back together.”

Another resident resonated the mantra that hundreds felt that day: “ It makes me feel inspired that we are moving in the right directions. And it makes me feel blessed to be a part of it.”