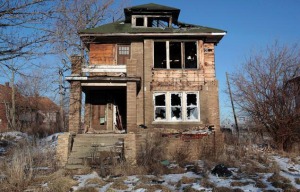 When the Detroit Water and Sewage Department (DWSD) starts going after homeowners with $200 in outstanding bills, and leaves those with $25,000 in debt, free to continue running, questions and accusations start to arise.

Sherman Foster, a Detroit resident, did not pay his bill for several months, before receiving a letter that his water would be shut off if he did not pay the $200 fee. While Foster hasn’t made excuses on not paying his bill, he does want to know why the DWSD has chosen to attack him, and let the abandoned house next door run up a bill that reaches over $25,000.

The DWSD has been under fire and heat since the water shut offs started earlier this year. Nearly 20,000 homes have now had their water shut off in Detroit, and the recent bills for the DWSD have racked up over $80 million in debt. However, many are starting to notice that these high numbers are not due to homeowners who are just a few months behind, but rather the water department allowing water to continue running in homes that have not had residents in years.

The water department understands and admits that they may never see most of the money back from this debt, but have not addressed why they have chosen to go after the small amounts that wouldn’t make a dent. Due to the increased scandal of this issue, the suburban areas of Metro Detroit have now created the Great Lakes Water Authority. This new proposition would grant $50 million to Detroit, over the next 40 years, to restructure and maintain water system advancements. This proposition is scheduled to be decided on October 10th, 2014.

Darryl Latimer, the DWDS deputy director, has explained that the water department is now working to address the abandoned home issue, before water bills sky rocket. The have developed a system that will start in 2015, that will no longer send bills out to tenants, but rather homeowners and landlords. With pipes that burst, tenants that leave, and residents passing away, the water department states they cannot keep up with all of the issues that arise. By making homeowners more accountable, and sending bills directly to them, rather than a listed address, they hope that they can resolve a majority of their outstanding debt in the next few years.

However, residents of Detroit are not convinced that this new system will work. Many state that while broken or stolen pipes are reported, the city does not do anything to address the problem. One Detroit resident, Lavince Pruitt, is taking matters into his own hands, by bidding on an upcoming auctioned home that is across the street from his residence, tearing it down, and starting fresh. He states that if the city isn’t going to handle the homes when there is still hope for them, it’s time for residents to fix it themselves.