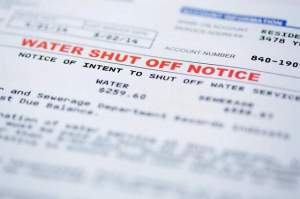 The issue of blight and foreclosures in Detroit doesn’t stop with abandonment of homes. The taxes, bills, and other expenses that go into these homes ends up falling into the hands of the next owners, if any are willing to step up. The Detroit Water and Sewage Department (DWSD) are starting to see the effects of unpaid water bills on these blighted homes, and have decided to move towards a different method of collecting payments.

Nearly 7 years ago, Detroit officials placed unpaid water bills onto the property taxes of the homeowners. While received critically from residents, the DWSD was able to collect over 75% of their unpaid bills, through this method. However, due to the increase in foreclosures, blight, and failed auctions, Detroit has started to look for a new solution. Starting in 2015, the DWSD will start sending delinquent bills to homeowners directly, rather than the address on file.

Darryl Latimer, deputy director of the DWSD, has explained that since the increase in foreclosures, the department has had a rapid increase in those who choose to never address their bills. The previous practice of bundling water bills into property taxes did not go over well with homeowners, and as a result, more bills have started to go unpaid. The amount of delinquent property taxes and water bills has gone up by nearly 20,000 homeowners, since 2008. Latimer explained that while the water bills are not the sole reason why people have lost their homes, bundling the bills has not made the situation any better for struggling Detroiters. Outstanding water bills make up nearly $21.5 million on the foreclosure home debt.

After three years of unaddressed taxes, homes go into the foreclosure process. At this time, many homes in Detroit are being placed up for auction. It is the responsibility of the auction winner to pay all debts, including outstanding water bills. If the house does not sell during auction, all debts are relieved and bidding starts much lower for the second time around. Many are choosing to not bid on homes with high outstanding debts, as the auction prices are much higher than expected. Latimer has also stated that due to these issues the DWSD has started working with the winners of the auctioned homes, to make their water bills easier to handle.

While it received extensive criticism in the beginning of it’s practice, joining water bills and property taxes is not an uncommon practice across major cities in the United States. Many officials have stated that usually, the practice works very well, but as are most systems in Detroit, this city is hard to categorize as ‘normal.’ The hope for the DWSD is that their increased efforts to work directly with auction winners will help alleviate not only their outstanding bills, but minimize the new homeowner’s costs.