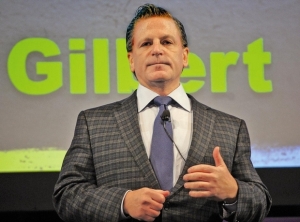 On the evening of September 11th, a day that is forever engrained in our minds as a reminder to join together and move forward in a positive direction, Dan Gilbert reacted to news that the Wayne County Jail project, located in downtown Detroit, may not be going as planned.

Wayne County officials stated that they are considering re-opening the jail, instead of offering the area to Gilbert for new housing and storefront space. Gilbert expressed his dire concern over the news, explaining how turning the space back into a jail would take Detroit several steps back in the revitalization process.

Located in a busy area that surrounds the city limits of Detroit, Gilbert stated an additional jail facility is the last thing Detroit needs to add to its’ plate of goals and aspirations. His full statement reads below:

“The prospect of building a brand new 400 million dollar jail as the ‘welcoming’ structure at the gateway to downtown just off the busiest freeway exit into our urban core at the very same time Detroit's center is undergoing an unprecedented positive transformation should outrage every single citizen, business and government official of our great city. At the exact moment we finally have the momentum and scale to overcome decades of decline as well as the increasingly inaccurate image and perception of Detroit being a crime-ridden decaying city, it is unfathomable there is even a thought of continuing on with a project that would put a massive county jail at the foot of the entry to downtown.

This critical land must be developed into uses that are consistent with a city that is on the rise and creating the environment to attract brain-economy companies and the kind of high-wage jobs that these businesses produce as well as residential and commercial projects that accompany this kind of growth.

Detroiters deserve better than local leaders moving forward with a shortsighted reckless plan because it may be viewed as an easier path at this point in time. Let me not mince words: Building this jail at this crucial location would be nothing short of an unmitigated disaster that will echo with negative implications for downtown and the city for decades to come. There are several well-thought-out alternatives that are light years better for Detroit and Wayne County that over the long run will also be economically favorable as well. It’s a new day in Detroit and it is time we start learning from some of the senseless and illogical bad decisions of the past by not repeating them. It is clear that locating a major brand new jail at the foot of the busiest gateway to downtown Detroit would rank among this region’s worst decisions of all-time. All of us: The county, city, state, business community and citizens must come together and do much better than implementing a long-term abhorrent plan for the gateway to downtown Detroit.”

Businessman Dan Gilbert's team predicted Thursday that a residential tower planned for the site of the old Hudson's store will set a new standard for renting apartment complexes in the city of Detroit. The planned residential tower is set to represent just a piece of what is to become a multipurpose building on the old Hudson site on Woodward Avenue. Plans are still being laid out to make it for a set year-end deadline to have the deal finalized by the city.

Rental rates across downtown Detroit have risen substantially for the past few years. The new tower is set to follow that trend. Gilbert's organization is still awaiting city approval for the transfer for the Hudson site to ensure it is in line with the required affordable rent component in all city-supported deals.

Detroit Mayor Mike Duggan declared that new development receiving city assistance would reserve at least 20% of its units as "affordable," or generally for residents making no more than 80% of regional median income levels. Since Gilbert would be getting a city-owned site for the project, the Duggan goal would certainly apply to it.

Overall, the deal will offer help to a decade-wide issue of the declining population of Detroit and bring about more residential hot spots throughout the city. 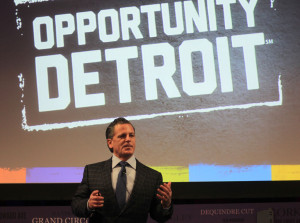