Demolition In Detroit: Which Buildings Do You Chose? 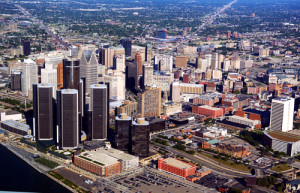 Matthew Moroun is the vice president of the Detroit International Bridge Company (DIBC), and often finds himself facing some difficult decisions. His company owns several vacant buildings in the city of Detroit, and it’s his job to decide what to restore, what to tear down, and how to usefully utilize the land. Recently, the DIBC made the decision to tear down The Fleet Specialty Warehouse Co. building, located on Fort St., in the heart of Detroit. This vacant commercial property has not been in use for years, and Moroun felt it was time to bring it down.

This decision has not come without attention from both sides of the argument on renovation in Detroit. Residents of the surrounding neighborhood have been in uproar since the decision was made, as they feel the building could still be purposeful useful to the city of Detroit. Moroun purchased the warehouse in December 2013, and the decision to demolish is has been in the works for several months. Moroun has explained that the DIBC plans to use this space for the expansion of their vehicle repair and neighborhood maintenance facility. Thirty-three year old resident, Sean Mann, stated, “I guess I don’t see this as blight. This property had a lot of potential.” Mann explained that just because DIBC have the resources to demolish the building, shouldn’t be the determining factor to do so.

Moroun addressed Mann’s concerns, and explained the stance of DIBC; “As you know, we own a lot of properties in the city of Detroit. We’re doing out best to improve those properties and make them safe.” Moroun agreed that while the building did have future potential in the city, the resources gained from this space would benefit the city even greater.

The main focus and project for the DIBC has been to restore Michigan Central Station. Acquired several years ago, the Moroun has stated that they have already invested millions into the old train station, and are hoping to put in even more. The available funds that are acquired from the space at the warehouse, are planning to be put to use at Central Station directly. Moroun explains, “We have invested about $4 million so far into the depot, and we intend to invest another $8 million into the depot, in just the first phase.” In a direct response to Mann, Matthew Moroun statd, “So, I’m with you on the blight and the potential, but there are choices to be made, and one of the choices my family made was that we’re going to invest in resurrecting a depot, and not this building here.”

In a bold move to renovate Detroit to a new glorious and economic standing in Michigan, the Detroit International Bridge Company has many more challenges ahead of them. They’ve urged residents to join in their efforts, in order to make the process more streamlined and efficient.